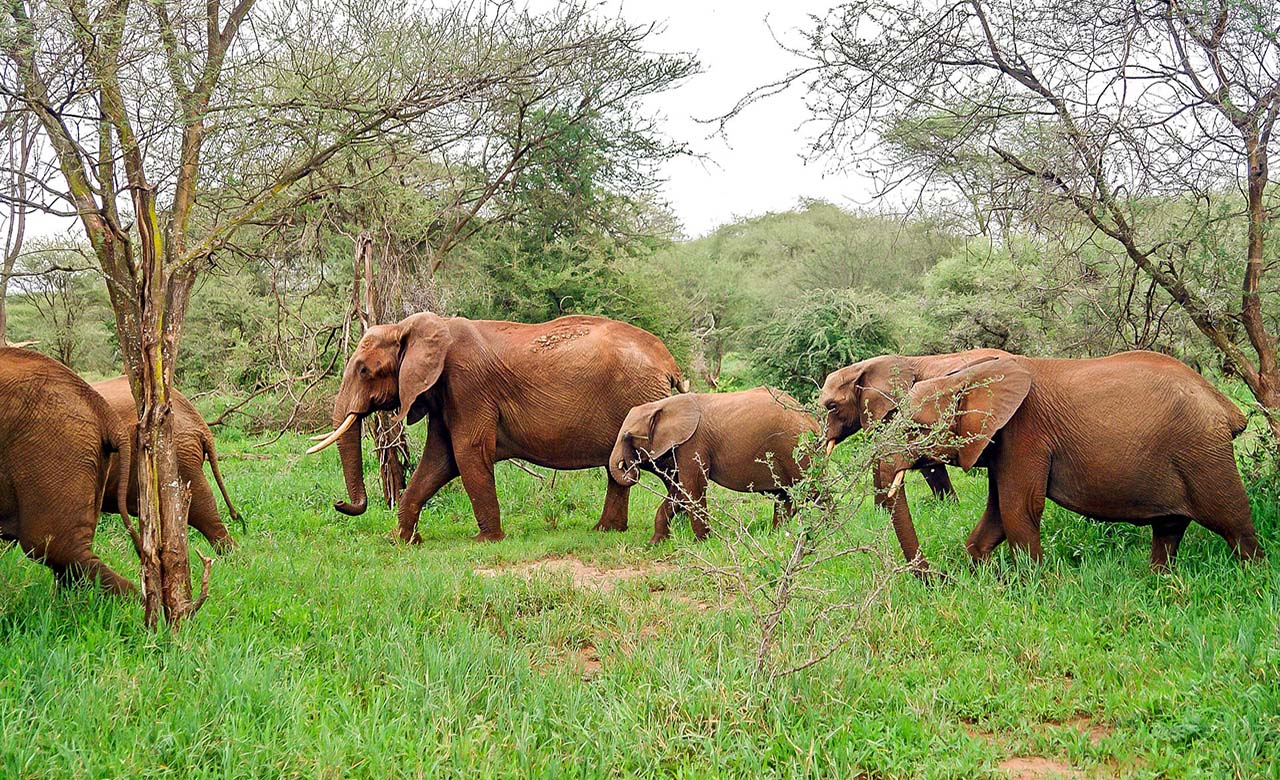 Gabon has 13 national parks and several nature reserves distributed throughout the country. The fauna and flora of Gabon are particularly rich, with many unique animal and plant species. The national parks cover an area of 3 million hectares, about 11% of the land area and 25% of the marine territory with 11 aquatic reserves. They were created with the purpose of promoting the development of the ecosystem. In addition to a maritime domain estimated at 26,500,000 ha, its geographical location grants it a coastline of 800 km opening on the Atlantic Ocean. 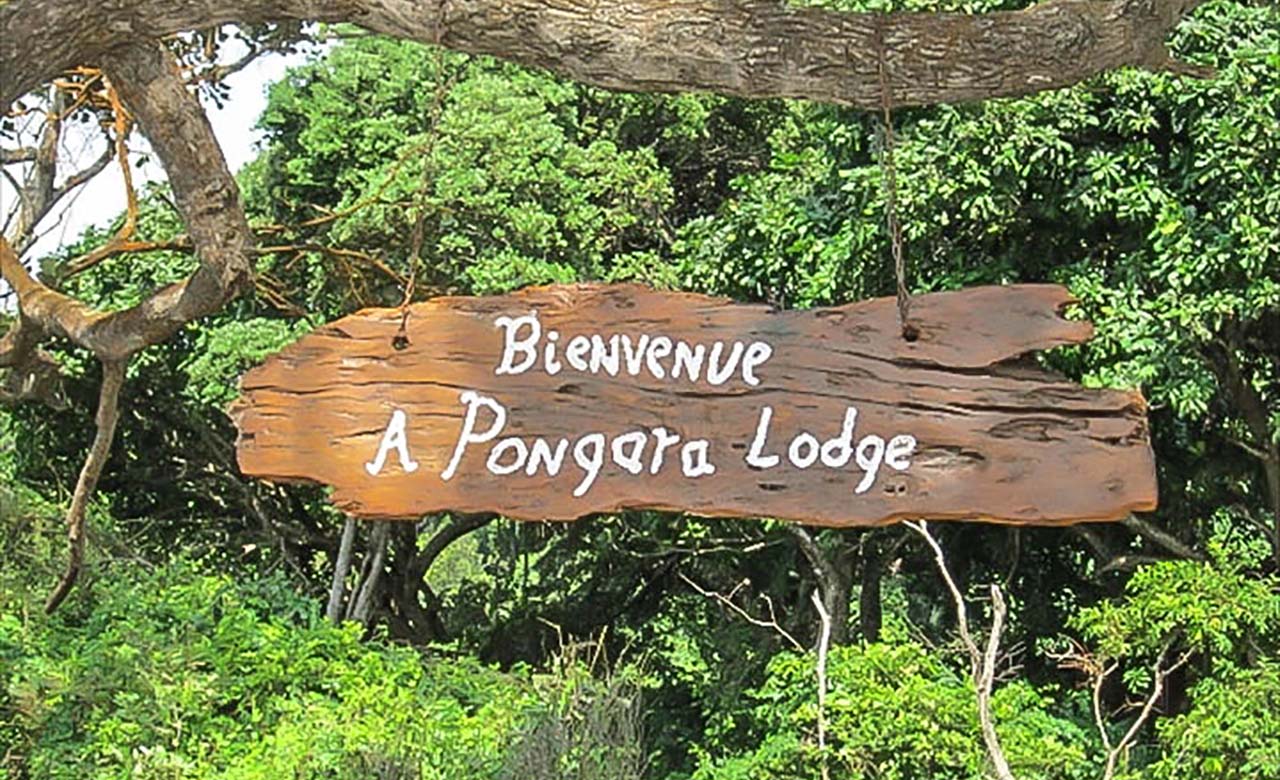 It is located in the west of Gabon, in the Estuary province, 20 km from Libreville. The Pongara National Park was created in 2002. It covers an area of 92,900 ha between the left bank of the Komo estuary and the Gulf of Guinea. It is made up of different types of forests, grassy savannahs, and mangroves and it is crossed by several rivers. The Pongara National Park is home to buffalos, hippos, duikers, elephants, amphibians, reptiles (turtles, lizards, and snakes), monkeys (chimpanzees), many fish species, mangrove crabs and many more. The tuna whales, an endangered species, live there. There are also various species of turtles. The park is an important breeding ground for the

leatherback turtle (Dermochelys coriacea). The savannah of the park is home to many plant species, insects and birds. About 160 species of birds are counted. The plant species present are typically those of the mangrove. Its freshwater marshes are populated with fish while on the ocean one can see dolphins. The park has been classified since 2007 by the Ramsar Convention as a “wetland of international importance. 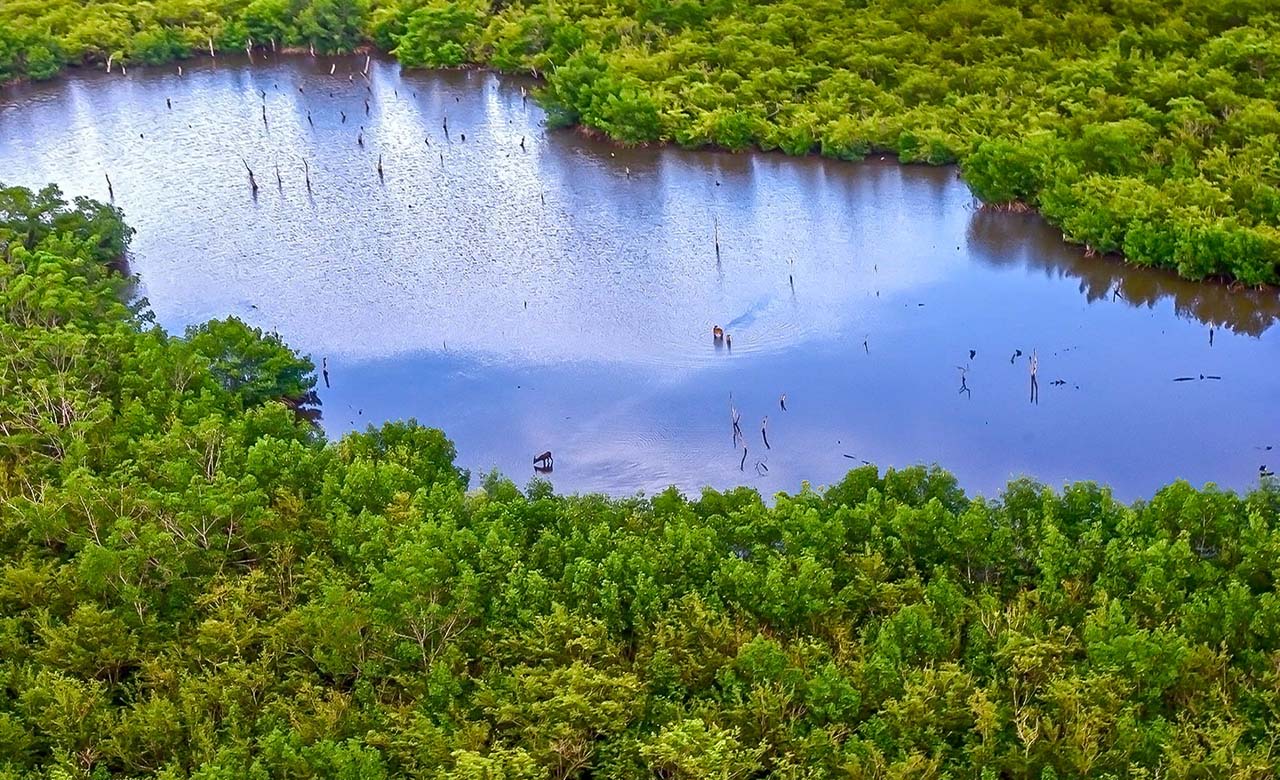 It is located in the west of Gabon, in the Estuary province, not far from Libreville. The Akanda National Park was created in 2002 and covers an area of 54,000 ha. It is bordered by the Mondah and Corisco bays. This park has a mangrove landscape, which is rich in aquatic species, amphibians, and birds. It is Gabon’s most important site for migratory birds, some of which visit only briefly, such as the gray pelican and the white pelican, while others stay more regularly in the fish-rich bay of the park like the herons, egrets, ibis, episcopal storks, and spoonbills of Africa. The waters of the park are also frequented by marine turtles and there are also typical specific plants that you find nowhere

else, such as the strophanthus or hanging mosses, found only in very humid tropical forests. As for the marine fauna, apart from the whales and fish (tuna) that come to reproduce, the mollusks and crustaceans, we can, with a lot of luck, see manatees. Large mammals are absent and the species present are very few such as some varieties of monkeys and sometimes pangolins. 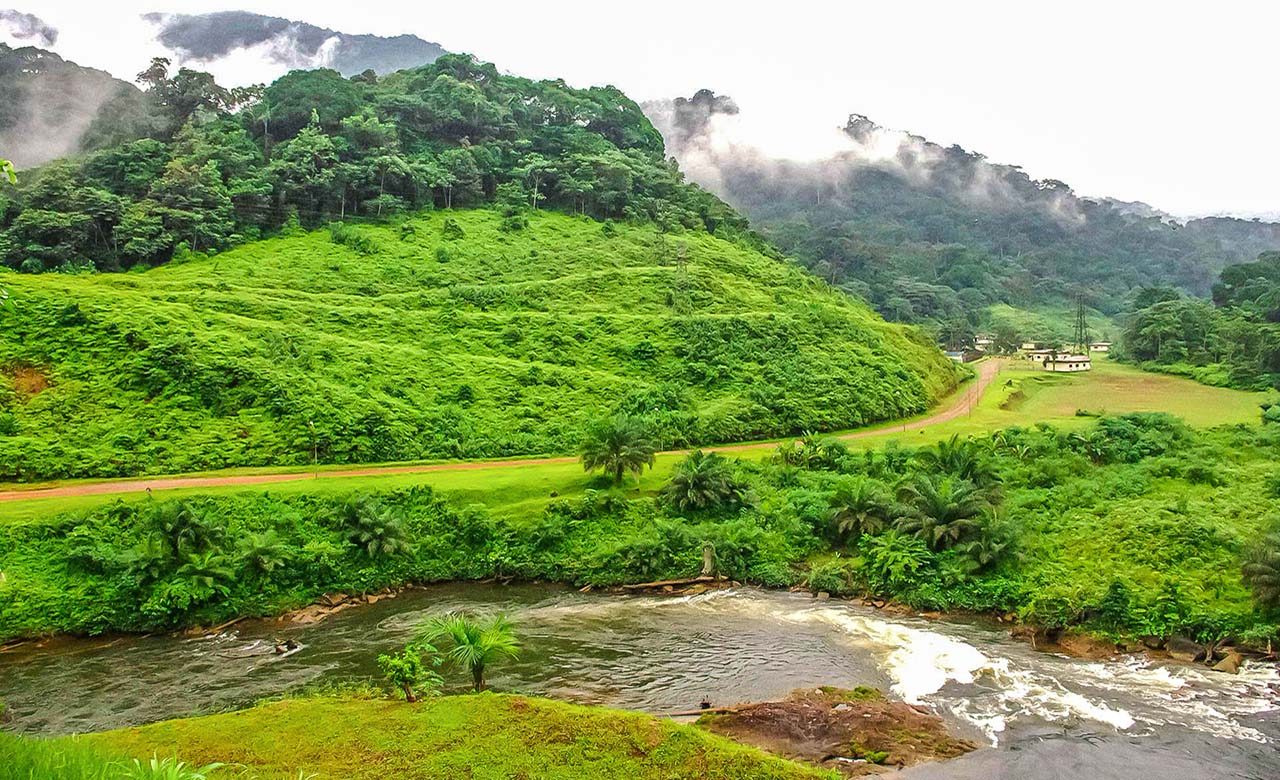 It is located in the Estuary province, 3 hours’ drive from Libreville. The Mount Cristal National Park is made up of rainforests with reliefs of 200 up to 900 meters above sea level and covers an area of 120,000 ha. Its biodiversity makes it exceptional among other National parks and Its particularity comes from the fact that it is made up of a very old and little disturbed forest and it is one of the most diversified zones of Africa. There are plenty of plants, butterflies, orchids and begonias. It is dominated by a mountain range whose summit rises to more than 1000 m. The euphaedra brevis, the cymothoe or graphium augrier and several other butterfly species have made this park their

It is located in the northeast of Gabon, linking the province of Woleu-Ntem and Ogooué-Ivindo. The Minkébé National Park was created in 2012 and covers an area of 800,000 ha. It is totally uninhabited. It is populated by giant trees that can reach 50 meters of width and some of these trees are several hundred years old. The park is also dominated by large boulders and is the second-largest intact forest block in the world. It is home to a large fauna and flora, with a large colony of elephants despite the presence of hunters and poachers who considerably decimate them. Several varieties of primates are also present. 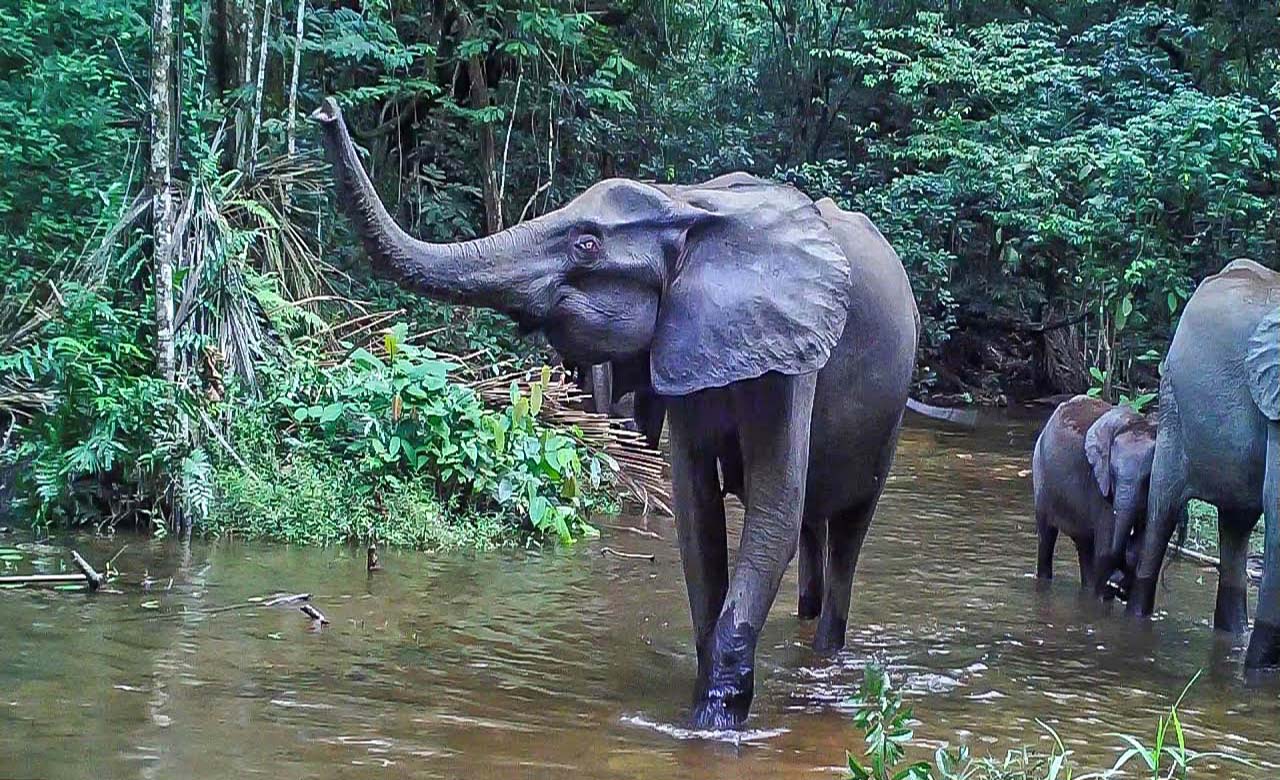 It is located in the eastern part of Gabon, more specifically in the Ogooué province. The Mwagna National Park was created in 2002 and covers an area of 120,000 ha. It is uninhabited and considered as one of the two rainforests of the world. It is home to species of animals and plants that love soils that are rich in minerals. There are typical forest elephants, various monkey species, bongos, antelopes, Gabon viper, the pygmy Hornbill, Hartlaub’s ducks, and many other endangered species. The National Park awaits you for an unforgettable adventure. 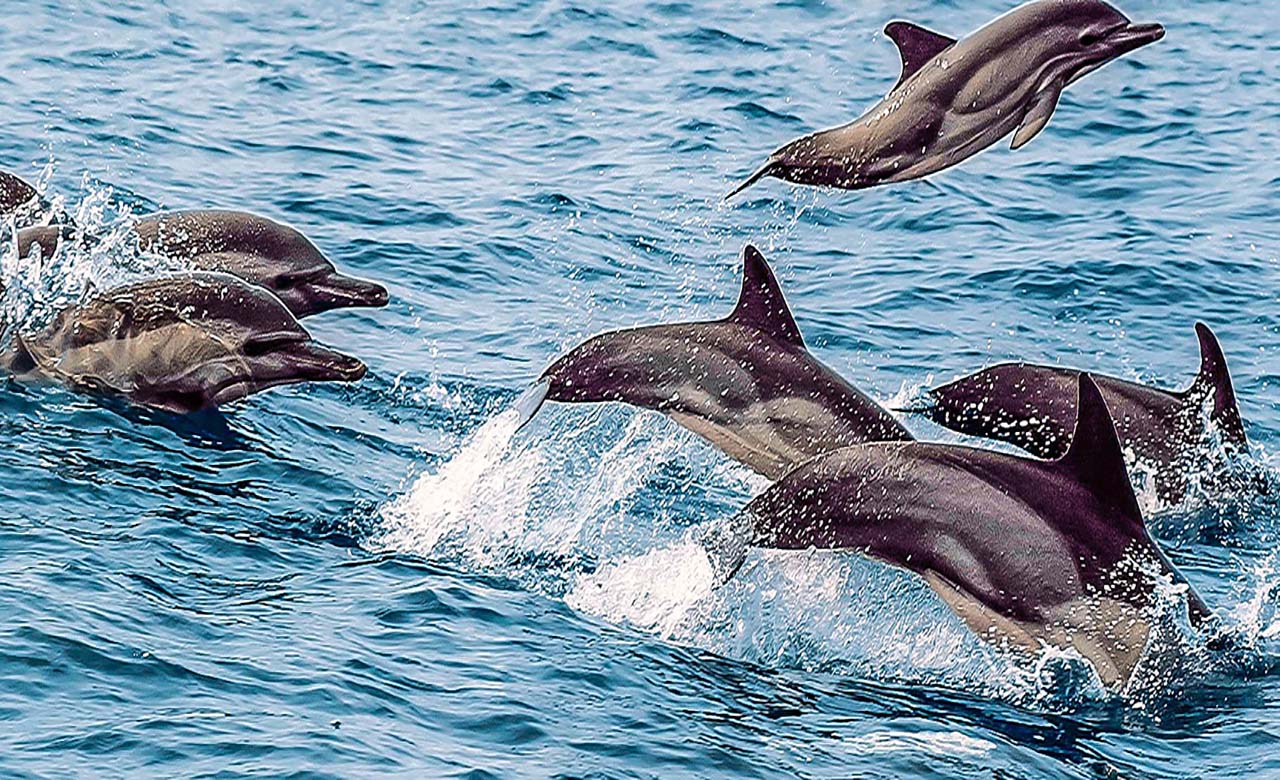 It is located in the Nyanga Province. The Mayumba National Park was created in 2002 with the aim of protecting the Gabonese marine biodiversity. It is a thin sandy strip at the southern end of the country, between Mayumba and the Congo border. It covers an area of 92,000 ha and is home to 60 km of beaches and coastal vegetation that serves as a breeding ground for leatherback turtles. The park is home to lizards, genets, mongooses, sand crabs and coastal birds. Buffalo, elephants, mandrills, gorillas, chimpanzees and other primates are common in the forest and savannah mosaic. Hippos, crocodiles, manatees, a wide range of fish species and several bird species are also present

in the park waters.

It is located in the northeast of Gabon, in the Ogooué province. The Ivindo National Park was created in 2002 and covers an area of 300,000 ha. It is a very important forest block, much of which has not been affected by logging. It is crossed by the Ivindo River, one of the most important Ogooué tributaries. Much of the park is covered with very old dense forests and is home to rich and rare biodiversity. The park is home to about 430 bird species such as Jacob parrots, raptors, Picathartes and gorillas, elephants, chimpanzees and many more.

Located between 4 provinces, the Lopé National Park was created in 2002, it covers an area of 500,000 ha and has been listed as a UNESCO World Heritage Site since 2007. The park is qualified as mixed because it is remarkable for its forest as well as its savannah. The National Park is home mainly to tropical forest animal species. There are about 50 mammals such as the lowland gorillas, chimpanzees. Hippos, elephants, buffaloes, several duiker species, bushbuck, sitatunga (rare), bush pig, several Cercopithecus, mandrill and drills species and more than 300 bird species such as Picathartes, African peregrine falcons and many other species. 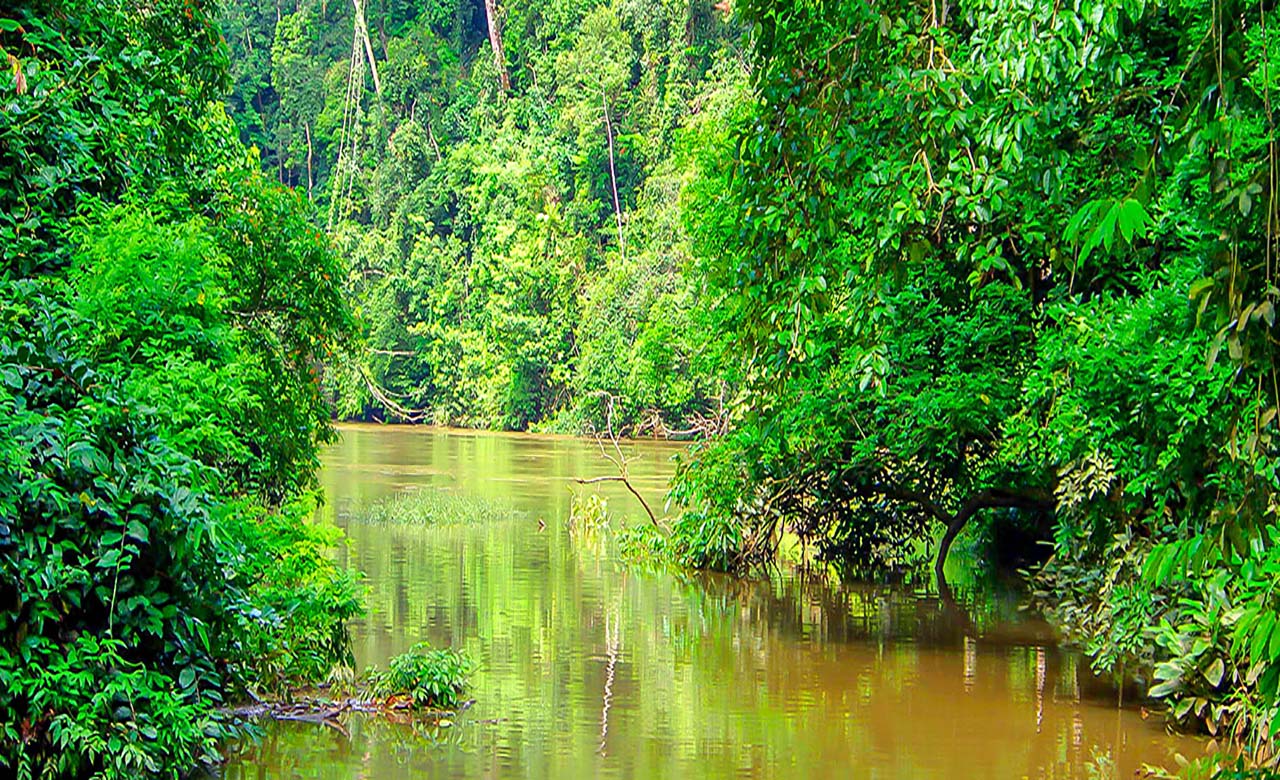 Located in Ngounié province, the Waka National Park was created in 2002 and covers an area of 107,000 ha. There are about 1,500 plant species, 400 bird species, nearly 85 mammal species, and many reptiles and amphibians. The park’s fauna consists mainly of elephants and primates. Several endangered species are also listed, such as Colobus Satanas, Pan troglodytes, and gorillas-gorillas. 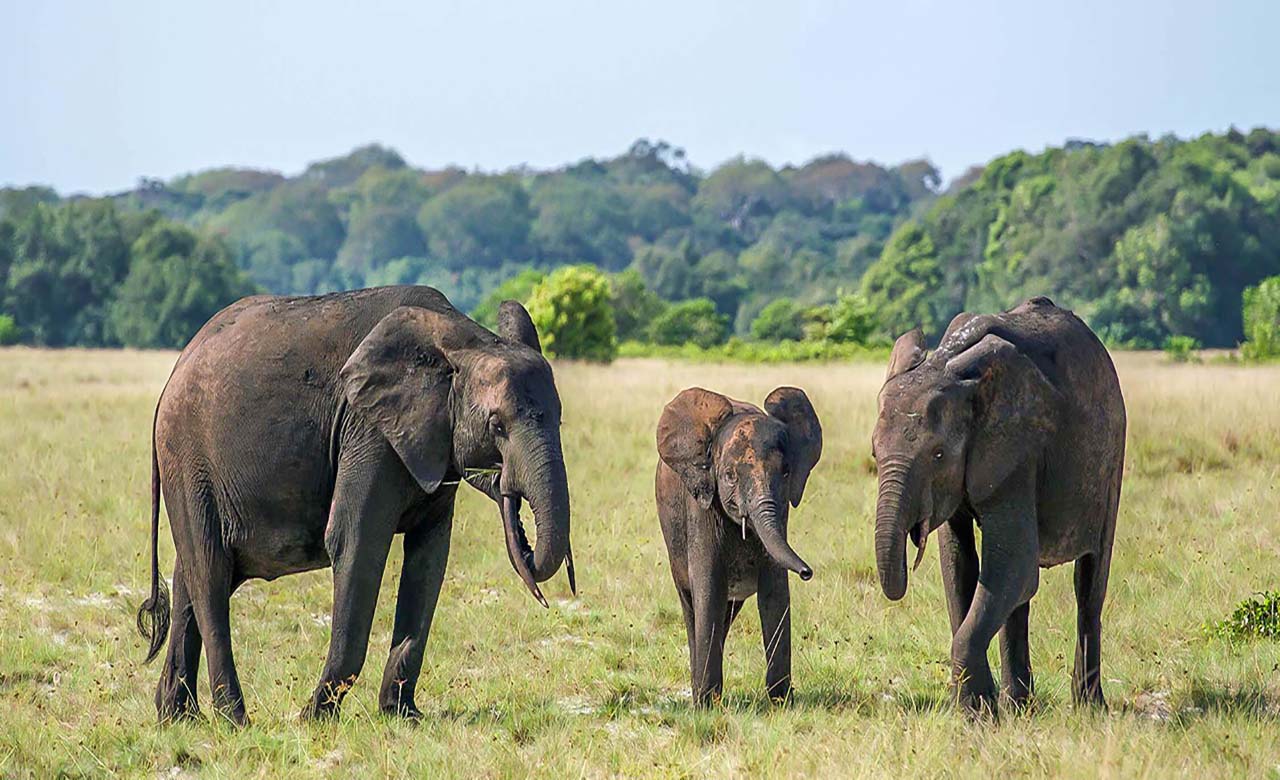 It is located on the Gabonese coast, in the Ogooué & Maritime province. The Loango National Park was created in 2002. It covers an area of 155,000 ha. It is made up of forests and savannahs and it is one of the Central African National Parks encompassing a lagoon (Iguéla). It has been listed since 1986 on the list of Ramsar sites. It is populated by an exceptional and abundant fauna, it shelters hippopotamuses, buffaloes, elephants, bush pigs, several monkey species, duikers, and several reptile species. Sometimes one can see gorillas and leopards. From the beach, you can see humpback whales and dolphins. The beaches of the park are a favourable nesting place for

leatherback turtles who come to lay their eggs. The lagoons are populated by many fish species such as tarpon, captain, barracuda or red carp, crocodiles and manatees can also be seen. 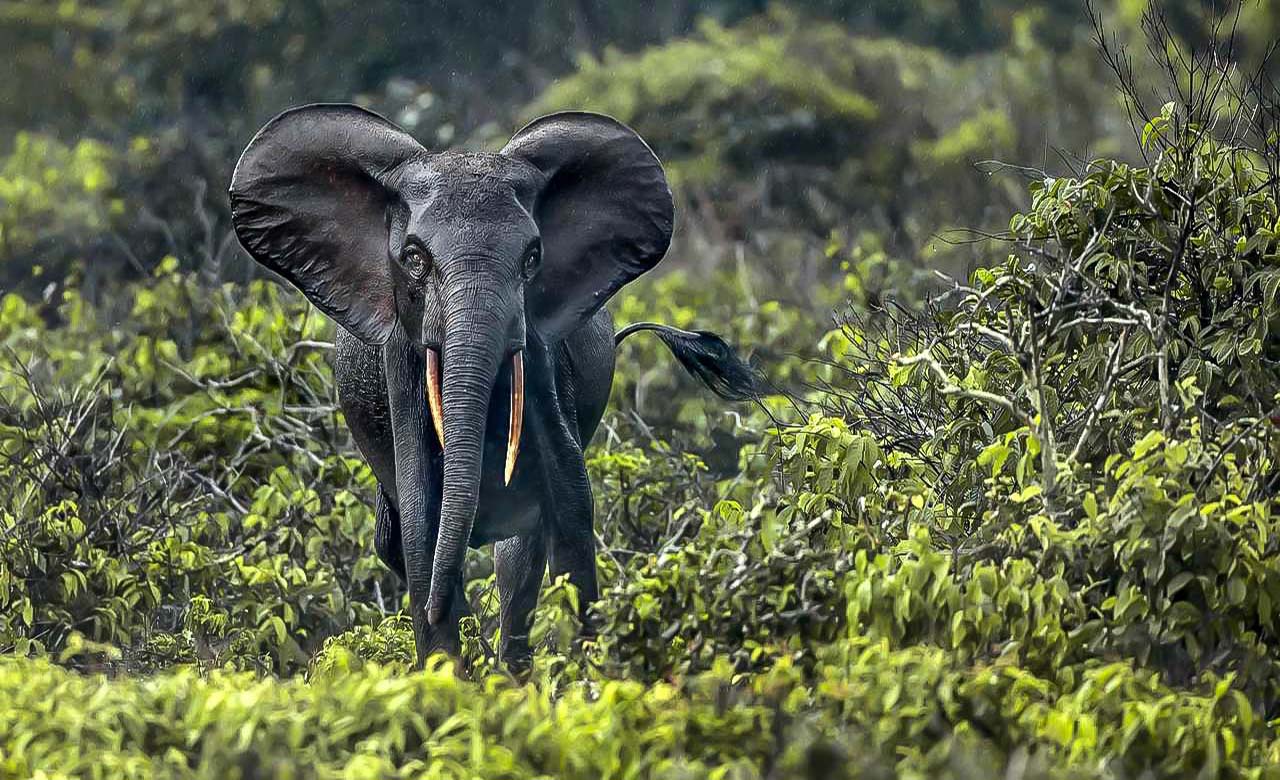 Located in the Nyanga province, the Moukala-Doudou National Park was created in 2002 and covers an area of 450,000 ha. It is one of the important sites in Gabon as it brings together two protected areas, the Moukalaba, and Mount Doudou. The National Park has been a UNESCO World Heritage Site since 2005. It is made up of rich flora and fauna, swampy mountains adorned with river papyrus and humid forests. The National Park is home to several hundreds of elephants that gather in the papyrus. Primates (gorillas and chimpanzees) are numerous and have made this site the main habitat of great apes in Gabon. There are also various species of migratory birds such as storks and ribbed

swallows, as well as hippos and Fassa Cobes. 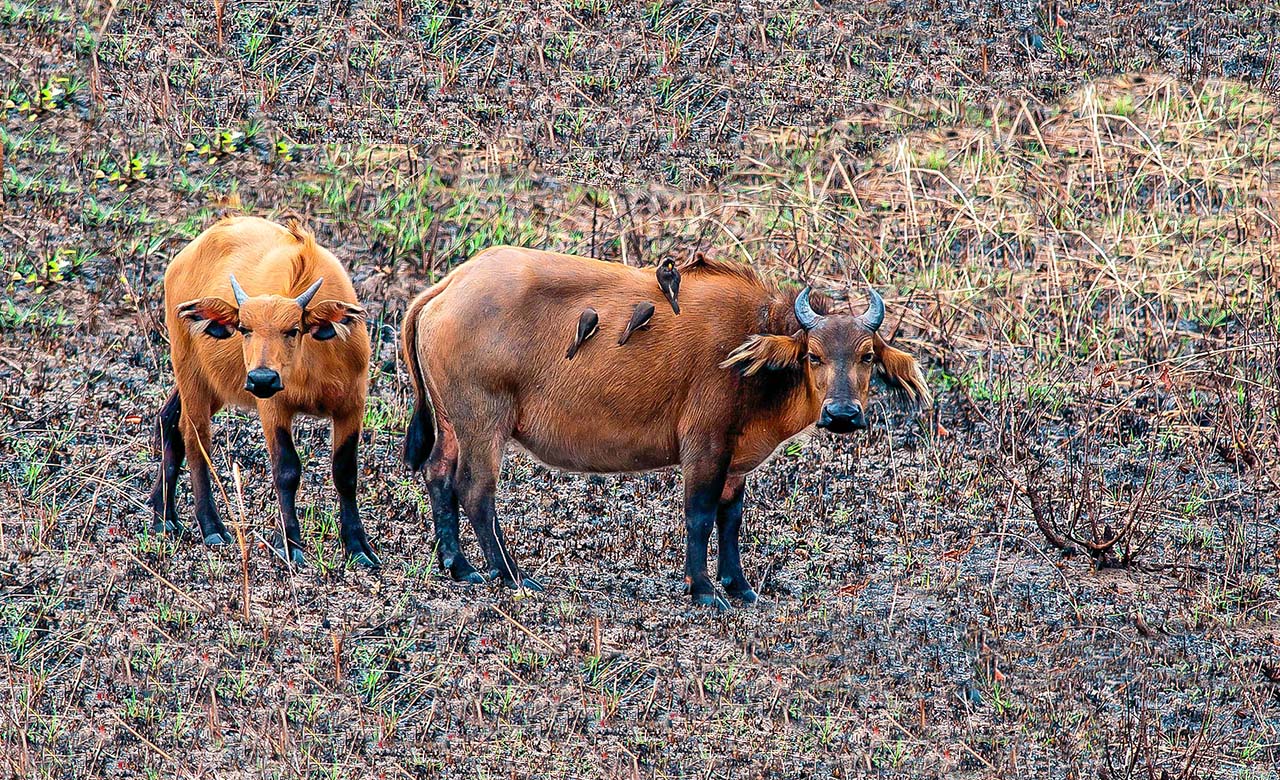 Located between the Ngounié & Ogooué-Lolo provinces, on the Congo-Brazzaville border, the Birougou National Park was created in 2002 and covers an area of 69,000 ha. The park consists of hilly hills with rounded or flat tops, culminating at 800 to 900 meters above sea level in the heart of the Chaillu massif. It has an extraordinary diversity of ecosystems, ranging from swamp forests to primary montane forests. The park is home to rare animals such as the Sun-tailed Monkey (Cercopithecus solatus), as well as Gorilla- Gorilla, Chimpanzees (Pan-Troglodytes), Buffalo (Syncerus caffer), Elephants (Loxodonta africana), white-footed duiker (Cephalophus ogilbi

It is located in the southeast of Gabon, in the Upper-Ogooué Province, on the Congo border. The Batéké Plateau National Park was created in 2002 and covers an area of 205,000 ha. It is composed not only of a series of plateaus but also of hills crisscrossed by several valleys which culminate at an altitude varying between 350 and 930 m. The vegetation is a mosaic of grassy and shrubby savannahs interspersed with humid gallery forests of various species. The park is home to a species only present in this environment: Grimm’s duiker, also called ntsa, but also the teké cisticola (endemic species), yellow-backed duiker, black-banded, white-bellied, the Side-striped jackal, the mustache 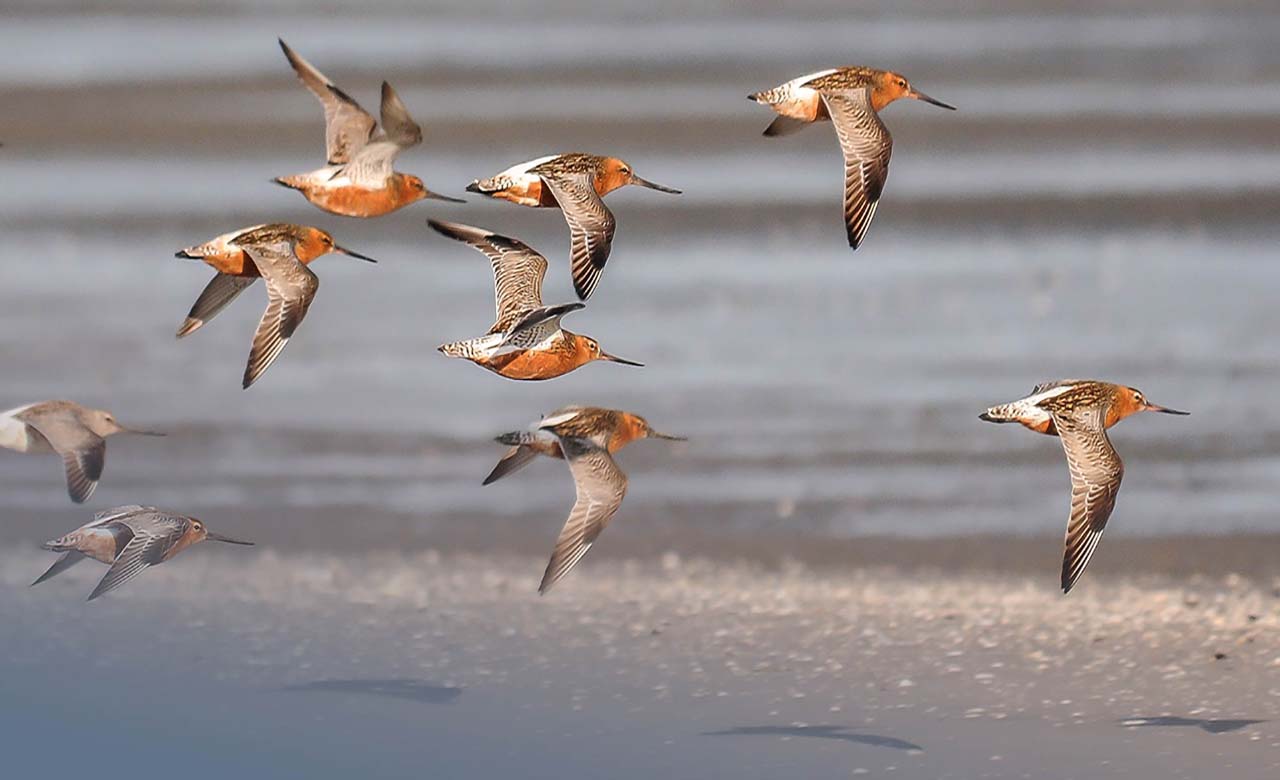 Gabon is a recent destination for ornithological tourism. It has several important endowments, the main ones are the good state of its natural landscapes and the quality of its fauna and flora. The network of protected areas, recently classified as national parks, makes it possible to observe most of the 680 known bird species. Depending on the season, migratory birds are added, including some rare species. Several observation sites have been created in the national parks, thus promoting access to birds. Species such as Finsch’s francolin, Congo moor chat, Black-chinned weaver, gray-gray bee-eater, black-headed bee-eater, African pseudolangrayen, Loango weaver, forest raptors, 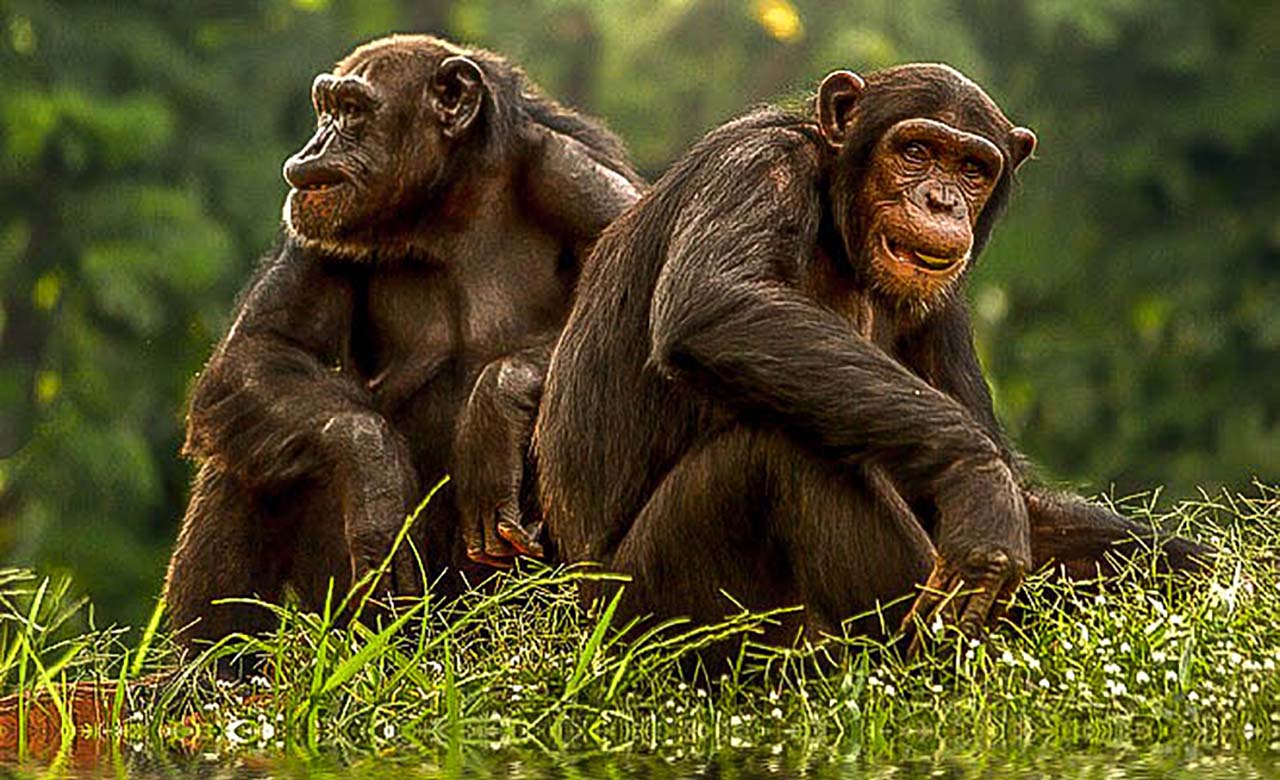 In addition to national parks, Gabon also has several wildlife reserves, several hunting areas and zoos in which many animal and plant species are represented. You will discover the splendid fauna and flora of Gabon.