The fascinating forest elephant in Dzanga-Sangha

The African forest elephant (Loxodonta cyclotis) is a mammal of the Elephantidae family, typically forest and smaller than its cousin in the savannah. They are generally found in the dense forest of Central and West Africa, but also sometimes on the edge of forest territories just like the savannah elephants. Their ears are generally smaller and more circular than those of savannah elephants. The tusks are also thinner and straighter. The males are between 5.5 and 7.5 meters long (6.5 meters on average) and weigh from 4 to 6 tons (5 tons on average), while the females are smaller, measure between 4 and 5 meters long (4.5 meters on average) and weigh between 2 and 3.5 tons (2.75 tons on average).

Like their cousins in the savannah or Asia, they are very social and live in groups. Adult females are generally followed by one or more young and adult males are often rather solitary. A group consists of 2.8 individuals on average and the family unit is 3.5 individuals on average. They are intelligent, have good adaptability and are endowed with an excellent memory. Like their cousins, they have several means of communication: sounds made, secreted substances, body language and a wide range which are all used during communication. A mutual contact with the trunk is a greeting ritual, which represents a particularly intimate gesture in the elephant’s world. 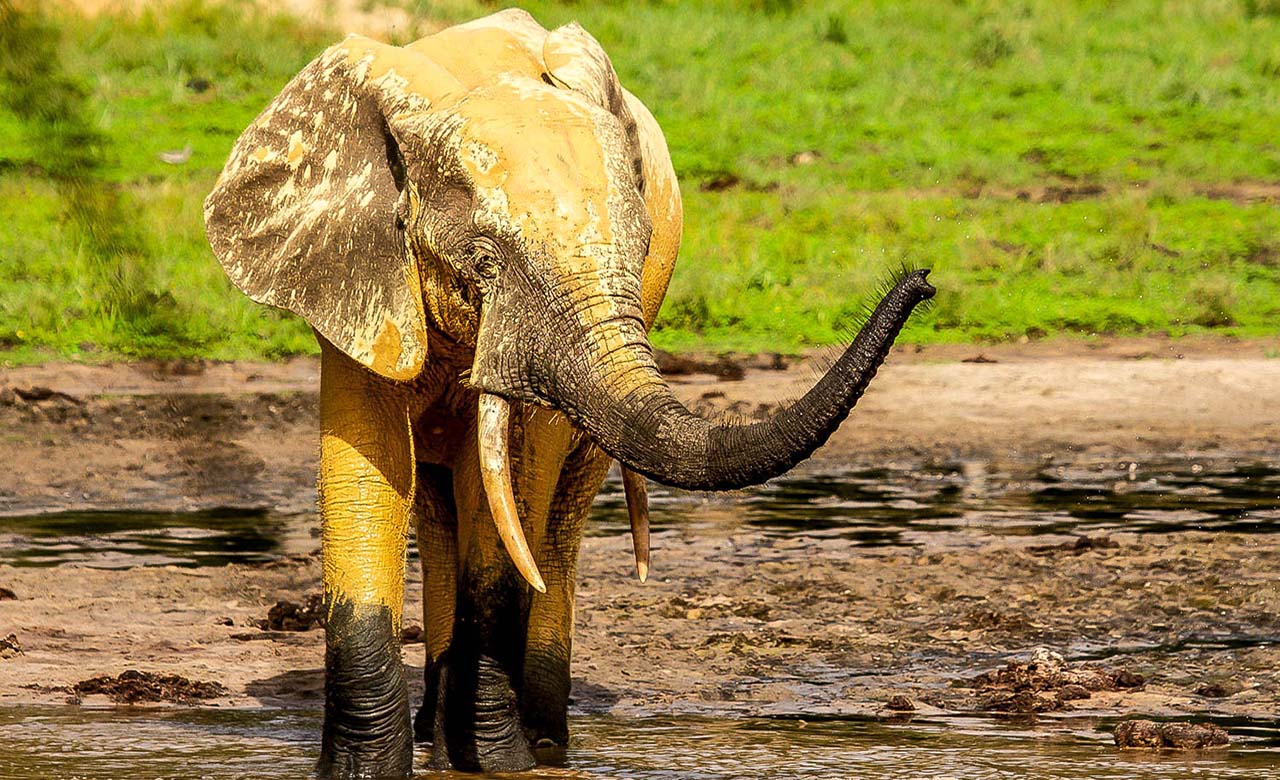 Its diet is very varied, at least 307 different foods were consumed by a group observed for seven years (1984-1991). Leaves, barks and fruits constituted 70% of all the observed elements. They cover large distances each day searching for food. Elephants play an important role in the reproduction of their ecosystem. They cover large distances each day searching for food and scatter the seeds from fruit consumption of many tree species all over the forest. The seeds are dispersed in a radius of up to 57 kilometers and this earns them the nickname of “forest architects” because they thus shape not only their habitat but also that of several other species. 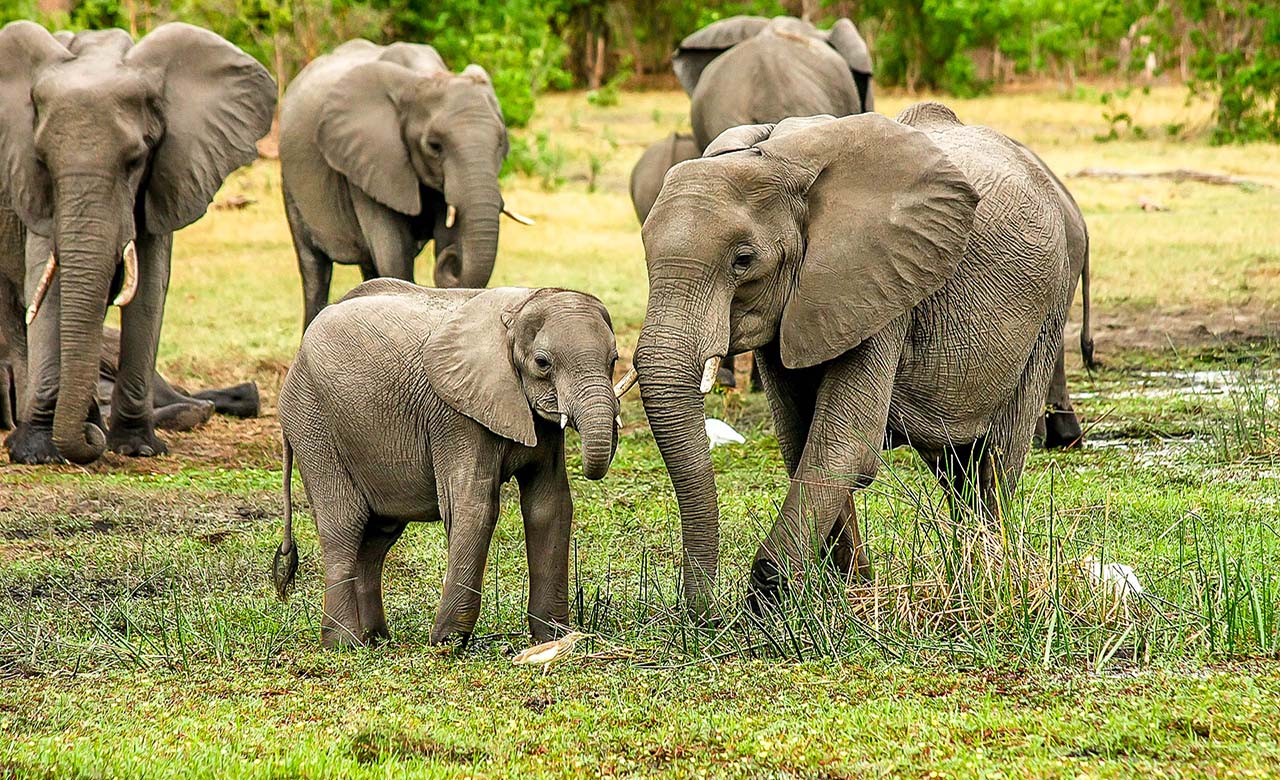 Estimated at several million before the colonial era, the elephant forest population fell in a few decades by almost 70%. The forest elephant is on the verge of extinction. Ivory trafficking is the main cause of the elephant’s disappearance and nowhere in Africa is it as important as in the Congo Basin. Forest elephant ivory is particularly sought after because it is more compact and more attractive on the market than savannah elephant ivory. 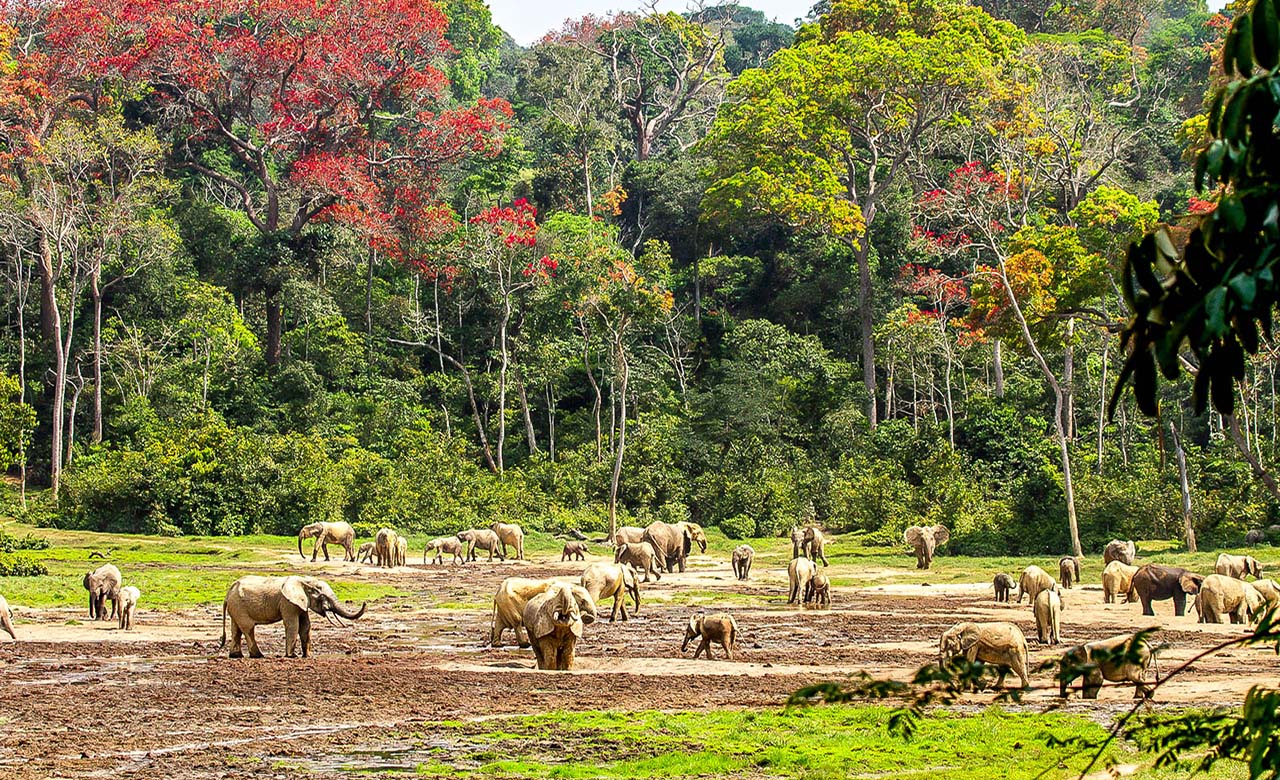 In the Dzanga-Sangha Trinational, more precisely in Dzanga Bai, visitors can observe and photograph large groups of elephant families of up to 150 specimens. Elephants in search of essential minerals dig water holes in the ground to collect them, take a mud bath and interact with each other. This constitutes a unique natural experience to be absolutely lived. 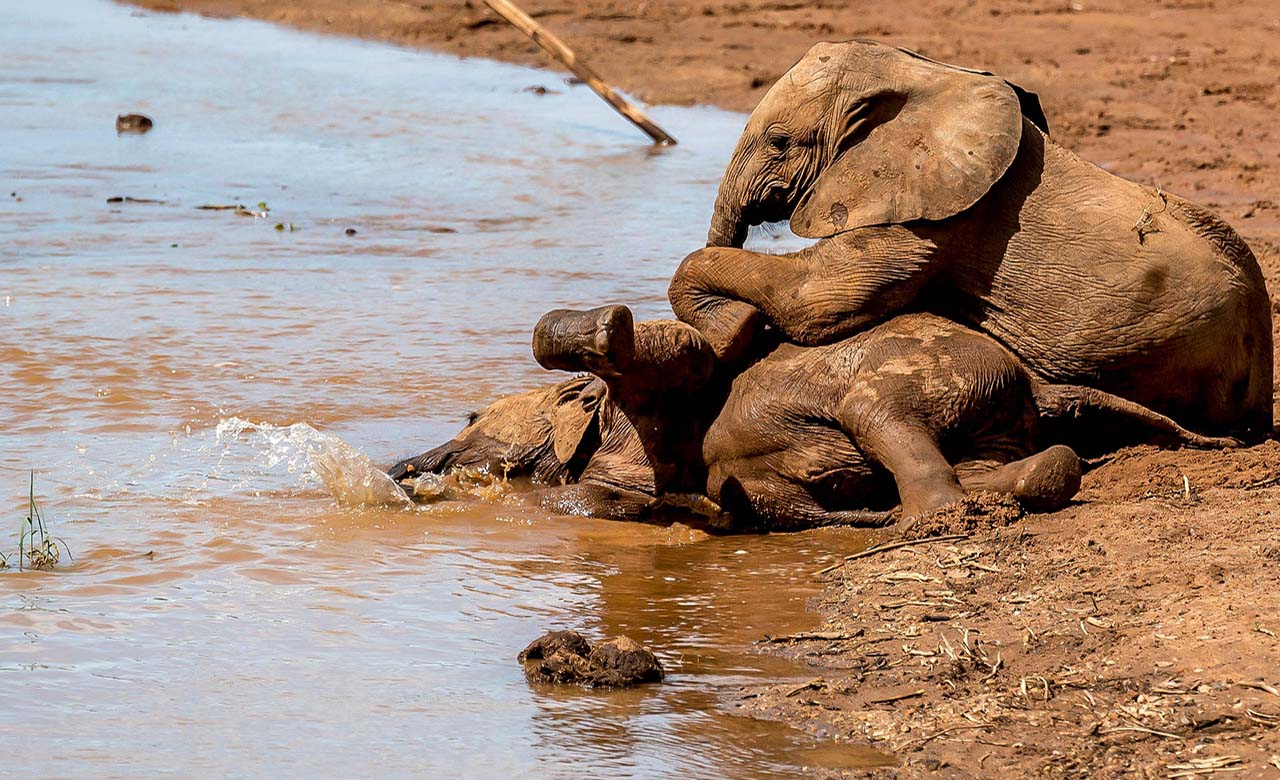 Watching elephants require strict compliance with the rules established by the park. Vehicles are parked approximately fourteen kilometers from the park, a hike of almost 30 to 40 minutes is then started. The path is crossed by small sandy rivers, so the park recommends that visitors wear light shoes. Accompanied by trackers, elephants’ tracks will be followed through a beautiful forest with a closed canopy. On the way, visitors will see small primates such as Mangabey and several species of birds that inhabit the park. When tracking the elephants, it is recommended not to make any noise, as elephants are able to move discreetly in the forest. Generally, the roaring and growling of
elephants announce their arrival. The park has a large platform that allows visitors to quietly observe the different animals in the clearing. For those who want to take photos, the afternoon is highly recommended due to better light and visibility. Without any doubt, Dzanga bai is the best elephant experience in the world. It is a large, mineral-rich clearing in the middle of the rainforest where forest elephants gather in large numbers to drink the mineral-rich waters and play in the mud. The interaction between so many different groups of Forest elephants ensures that no one can ever get bored of this place. Visitors will appreciate and enjoy the animal spectacle that offers the Dzanga Bai, several other animals from African forests will be at the rendezvous.